How to view Images

Examples of Susan’s artwork appear alphabetically. Images A - L display automatically (on the right), if no other selection is made. To bring up other selections, please see the gallery list (below) and click on a category. Images from that category will appear together (in alphabetical order). Thumbnails enlarge with a click. Hit the “play” button (bottom left of enlarged image) to start a slideshow, or “previous” and “next” arrows to go at your own pace. Enjoy! 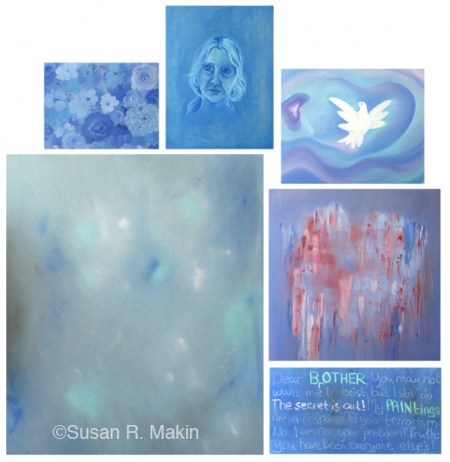 As art therapist, I make extra effort to not have confession or catharsis be the raison d’être for my fine art I creations. However, critiques just prior to pasting this series were provocative. My depictions had been described as bland, bothersome for lack of technical skill, and not edgy enough in subject matter. Ouch! I had also been told that I don’t challenge myself enough. Double ouch! Unfair ssumptions  like these seem to condone in an instant, no evidence of any desire to delve deeper or really understand. Critics who, themselves, don’t have the courage to pick up a paint brush have no right to deliver some of the feedback that they do. Constructive and sensitive criticism is great. There are ways to say things, and some things are better left unsaid.

Coming to the unsaid, I have lived a quiet torture for more years than I care to admit. Being shushed into silence and denial by close others who could have responded differently has me reeling. It, also explains, perhaps, why professional bashes by those who don't care to know what makes me tick prove disturbing. Ironically, the “pretty pictures” I create that critics so disdain empower and motivate regular folk. They end up on walls in healthful community settings, not galleries where shock appeal appears main attention driver.

Creating positive surroundings for others, when unable to do so for oneself is a survival mechanism that I won’t have put down. A raw nerve was touched at the wrong time. My Blue Truth is intensely private, but I now feel prompted to share it. I deeply regret if others are exposed through image content and/or descriptions. However,at the point of painting there appeared to be no other way to sort things through.

When goodness goes under-appreciated and dreams and natural milestones are quashed and lost, then what? May 2011 was full of anger, pain, and disappointment, and I wasn't able to hide this anymore. For one week, as this awful month came to an end, I gave myself permission to paint whatever came out. When there was nothing else to be done, I came face to face with images swirling in my head and from the unconscious.

Though it had incubated for a while, the entire series was painted in one week, a sleepless and memorable week.  While my circumstances are deeply personal, I think the final work, B(r)other Paint(ings) (as well as series) holds universal messages and meaning. If one other person can be comforted in their pain and know they are not alone, so as to be able to move forward, my sharing, and the agony experienced in so-doing, will have had appropriate purpose.

A Tuesday afternoon. The agony was great. I hadn’t painted for a while. Didn’t think I’d be able to. Picked up paint brush and blue paint, just one color. Picked up small canvas, less ground to cover. I could do it.yes! Patiently and carefully, I became engaged, an engagement I hadn’t had for a while. Flowers started emerging. Flowers have always comforted me. Once they started to appear, I went with them, adding different shades and shapes. So many flowers in my head. My father instilled in me a love of gardening. I am preoccupied now with his twilight years.Things he has enabled and things he has not. I want to go back to when things were good, fleeting memories of flower picking... Eight hours of painting and contemplating. I am surprised by my ability to make something appealing when feeling so awful.

Wednesday afternoon, the storm is losing its force and so am I. Nothing seems to work. Everything has been turned upside down and inside out. I have confessed, appealed, cried, begged. Stopped out, shut up, helpless and hopeless, I don’t like that state, but we all go there at some point. We never know quite when it will come on, what remnants will float around afterwards, where it will take us next. This piece came out quickly and provided much relief at the time. Looking back, I am peaceful when I see it. It enabled me to go where I had to next. I knew I had to paint some more, trust that answers of some kind would come in subsequent work—and they did.

I painted this self-portrait Wednesday evening through Thursday morning and did some tweaking on Friday. It wasn’t in my planning. Just as for Devastation is Blue, I hoped that brush and canvas could guide me somewhere. Because I’d be performing in an Art Battle the following week, I thought about practicing: creating a face within 20 minutes (the time I’d have to perform). 20 minutes up, I realized that the face was starting to look like me. So, I grabbed a mirror, kept on working. Working and crying and seeking soothing. This painting, and the process of making it became pacifier-like. The more I painted, the more real my pain became. The more acute the pain, the greater the desire to paint and to get it right—make the best piece I possibly could. I looked at myself and myself looked at me. Not a self-portrait that I would really want to share or be proud of, but a self-portrait that had to emerge for the messages and truths it held--a reminder of horrible times before, as well as horrible times now, and ahead. Another tortured soul, but one who had given up, came into thought. In 2003, the morning after my sister-in-law killed herself, I painted my first self-portrait. It combined aspects of her and aspects of me. It was now hanging in a room adjacent to my studio. I put the two works side by side and gasped with quiet knowing. The person common to both our lives was the agony generator behind my painting (and pain).

Friday afternoon/Saturday morning, I became obsessed with a little dove. I didn’t plan on painting her, but she wanted to come out. My canvases for this series are made from wood and when I looked at this one's grain before starting painting, a bird’s head spoke to me, “Please paint me, make me central to your piece.”  No reason not to, I thought. Birds aren’t my forte, but what was one more challenge now?! As I started to paint, I thought of what has been shared by others about doves. Picasso’s doves have come to symbolize peace, when, in actual fact, they can be quite cruel creatures. My dove gave me quite a struggle. A certain ambiguity began to emerge with her and I found myself fighting against it. That she was looking more ghost-like than dove-like was as apparent to others as it was to me. Friday night, I left her in ghost-like condition. Saturday morning, I brought more dove back in. Afterwards, her background seemed to transform itself from blue wash to being heart-filled, and, I thought, a little more hopeful. I felt a sense of composure when looking at the final piece. It was like nothing I’d ever painted before.

Later on Saturday and through Sunday, I tried moving on from blue, attempting to paint a more upbeat piece—red and yellow roses someone had brought to cheer me up. Hard as I tried, I couldn’t do it, kept feeling my rhythm interrupted. There was more to emerge in the blue series and I needed to keep on going. Sunday p.m. I was too tired to paint, but the incubation didn’t stop. I had at least two more works in me that would be able to surface in the time-frame I could reasonably give myself. The first, Open Wounds and/or Light at End of Tunnel popped out Monday p.m. This was not what or how I’d planned to paint, but it was what wanted to be there. Things will never be the same, and sometimes there’s no fight left. I am no Jackson Pollock, but splashing paint onto wood felt right at this time. Red for blood. Pale blue between the red. Wood showing through creating interesting effect (and affect) between the drips. I would have liked to go on, but I realized, quite quickly, that it was time to stop. Points had been made and were very clear, as well as open to interpretation. The title came later on reflection. Like Dove and Ghost, another ambiguous piece.

This piece had been incubating all week, and much much longer. By Monday evening, I was ready to commit it to canvas. I had never created anything similar and felt concerned as to who might view it and how upset close others could feel. I was tiredbof covering up the truth: terrorism and a legacy of hate passed to the next generation. Ever my priority: what others might think when my own life was in tatters and at risk. Irony and shame!
The statement that is central to the painting emerged spontaneously and concisely, summing up the key issue:

Dear B(r)other, You may not want me to exist, but I still do. The secret is out! My paint(ings) are in response to your terrorism. No, I am not your “problem!” Truth” You have been everyone else’s.

I am not a Scientologist, but, through the week, had found comfort in E. Ron Hubbard’s manual on Repression. When an anti-social personality comes up against a social personality there is a lot of danger and collateral damage from contamination. After a week of painting through the pain, I could finally admit that I won’t be victim anymore, and nor should anyone else.

My process in creating this piece was as interesting as the work that emerged (for me, at least).The final work might look a little regressive and child-like: have the appearance of chalk board writings or graffitied school desk. Some words are scraped out (with brush shaper). Others are highlighted in what could look like teacher’s chalk (but is actually paint). I am both tentative and outspoken in what I share. In bold: brother = bother, paintings = pain. The secret is out!. What I am more afraid to publicize, and is the crux of the matter, is a lot fainter. Viewers will have to look more closely to notice it: You may not want me to exist, but I still do. This image is a fear response. The reality: No, I am not your problem!  Truth: you have been everyone else’s.

Back to Top
Questions, comments, feedback, requests to reproduce or publish welcome via e-mail.
Please be aware of this website's disclaimer and copyright for all text and images.
©Susan R. Makin, 2005–2019